Captain Pike and Spock beam down Spock on the bridge

The original pilot doesn't have Kirk, Bones, or any of the later characters except Spock and Scotty. The pace is slower and the color palette more muted than the later series.  It's like a glimpse into an alternate universe in which Star Trek was more spooky and altogether more 1950's than 1960's - very much like Forbidden Planet remade for the small screen. I'm reading the Bible and learning some important lessons:

2.) If the voices in your head tell you to kill your child, go ahead!

3.) If there's no one else around, sleep with your father!

4.) If you sleep with your first cousin, but like her sister better, sleep with her too!

6.) Of all the gods that exist, and there are many of them, you should prefer your local god. Also, there is only one god.

And that's just the first half of the Pentateuch. I never knew how much fun it was to be holy!

From time to time I read the editorial section of the Wall Street Journal - the insane section of an otherwise great newspaper. I think it's healthy to expose oneself to a wide variety of opinions, no matter how odious, and I usually shrug off their editorials with a bit of humor. After all, these people are paid shills of the financial industry, so what can you expect? But sometimes the editorials are so mendacious, so deliberately evil, that I grow upset. Today Professor Daniel Klein made me so upset I mailed a letter. I don't expect the Wall Street Journal to print it, so I am also sharing it here.

Daniel Klein's "Are You Smarter Than a Fifth Grader?" deliberately misuses statistics to draw an unsupportable conclusion. Having carefully designed leading questions for a poll the author himself admits does not "challenge the political sensibilities of conservatives," he extrapolates the meaningless results to conclude the left "flunks Econ 101." There are two serious flaws with his methodology. First, he only asks questions that challenge the sensibilities of one political persuasion. He failed to include any questions that challenge beliefs of the right, such as: "Cutting government spending in a recession will grow the economy." Second, he assumes there are right and wrong answers to simple questions about complex subjects. For instance his assumption that restrictions on housing development makes housing less affordable ignores the quality of life costs associated with unchecked development. Development restrictions may raise the nominal cost of housing, but may also increase the quality of existing housing. Is one unit of housing in suburban Houston worth one unit of housing in Portland Oregon? The answer to that question says more about a person's values than their economic enlightenment.

Apple's App Store censorship is now totally out of control. They've gone beyond their ridiculous banning of even slightly salacious content (like French Vogue!), to banning political speech. They just denied a Pulitzer Prize winning cartoonist's application because of political content.

The iPad was supposed to be the new medium - an improved way to consume books and information - but it looks like it will be even more restrictive than print. Welcome to the future, suckers.

Just another day at the National Review...

It turns out "Climategate" was a totally manufactured scandal. I'm shocked... shocked to discover right-wing pundits pimped a fake scandal to spread fear, uncertainty, and doubt.

This all seems so familiar... I wonder why?

Ash from a large volcanic eruption in Iceland has shut down flights out of Britain. Maybe the old Norse gods are angry with the English for trying to screw the people of Iceland?

There is some fear this could be a harbinger of a larger eruption of the nearby mountain Katla, who's 1755 blast from a 10km-wide crater melted glaciers and sent the combined equivalent of the Amazon, Mississippi, Yangtze, and Nile rivers toward the sea.

This shot by Arnþór Ævarsson of the northern lights behind the volcano is probably the most awesome thing I've ever seen. 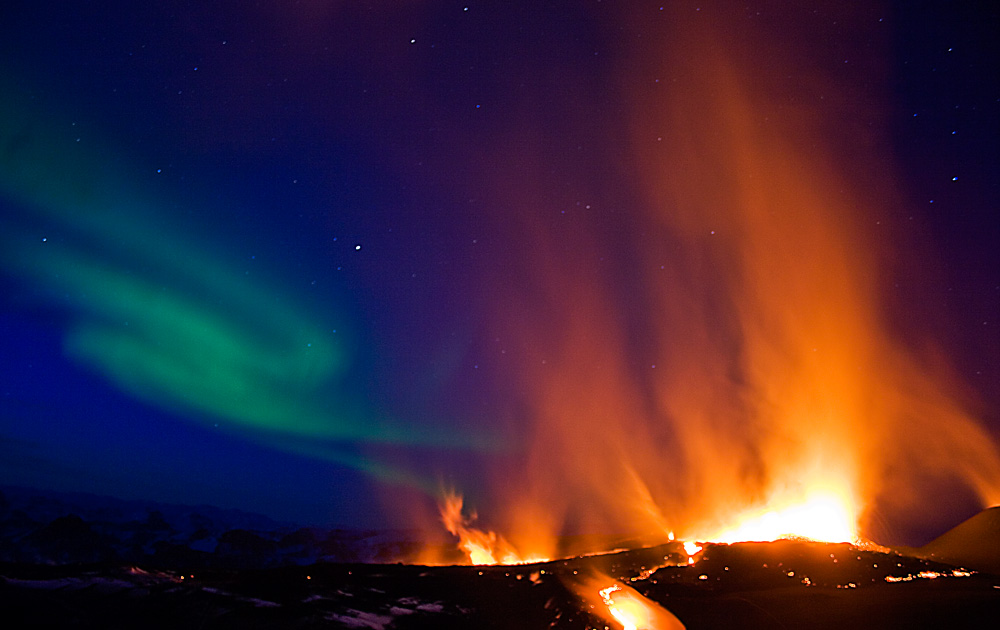 Last night I caught up with an old college friend visiting from Berlin, his charming German wife, and their infant son. We sat in his parent's living room chatting with a some mutual friends, drinking beer, and catching up. When they put the baby to bed we opened champagne bottles with a cavalry saber... like you do.

My friend has a law degree but decided to start a role-playing game publishing business instead, and has registered as an artist with the German government's Künstlersozialkasse program, which provides a pension, among other things. The government also provides his wife four months full pay for maternity leave, plus up to a year unpaid. I find it ironic that he's a republican artist suckling at the teat of the German socialist state, while I'm a liberal democrat working two jobs and paying tens of thousands in taxes to the American war machine. But it's this kind of contrast that keeps our conversations interesting, and I certainly respect his opinions and choices.

Someone had an iPad so I got to play with it a bit. I have to say they're better in person than on paper. The book reader application is a lovely piece of software, the device is very light, it has great battery life, and I could see buying one if the price drops below $300. But for $500 it just doesn't offer much more than my Hackintosh netbook for twice the price. It can't even stand up on its own.

A consumer is "something the size of a baby hippo, the color of a week-old boiled potato, that lives by itself, in the dark, in a double-wide on the outskirts of Topeka. It's covered with eyes and it sweats constantly. The sweat runs into those eyes and makes them sting. It has no mouth... no genitals, and can only express its mute extremes of murderous rage and infantile desire by changing the channels on a universal remote. Or by voting in presidential elections."
-William Gibson

The LiveJournal team thought there might have been spam activity from my account and suspended it. I wish they had at least sent me an e-mail telling me what was going on. It took a week to get them to re-activate it. It's hard to believe that after sixteen years in the software business I had yet to build a full website. But I specialized in desktop applications, like Visio and Universal Type Server, so the opportunity never presented itself.

I've spent several years working on a product with some friends in my spare time, and our old website sucked, so we decided to rewrite it. Please be kind. Our business manager bought a template before I got to evaluate it, and frankly it was a mess of fixed-size images, nested tables, and a heavy flash header. But we cleaned it up a bit and there are some things I'm proud of. Most of the text content is XML data transformed to HTML, so a non-technical person can update the content without republishing the site. I created a quote control that cycles through customer quotes on a timer. And the images can be zoomed by clicking on them.
Collapse